Illustrations that have been found on a Stone Age monument outside Kells are the world oldest recording of a solar eclipse in history. The carving records the solar eclipse of 3340 BC.

The ancient Cairn is one of about 50 on the site and thousands across the island. Most have remained unexcavated and indeed it is a tradition to add a stone at many causing them to grow in size over the millennia. Cairn L however has been examined by Martin Brennan and Jack Roberts who published their findings in Astronomy Ireland. 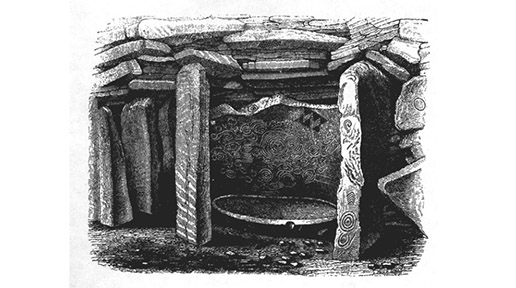 The two researchers found that the sun illuminates a chamber at the centre of the cairn on the mornings of two ancient Celtic Festivals – Samhain and Imbolc. These important dates lie during the first week of November and the first week of February, the ancient cross quarter days.

Carved on three stones were graphical representations of the precise eclipse, as seen from that location. When they looked back at solar eclipses they discovered that the 3340 BC eclipse was the only one that matched the carvings.

Many believe that the ancient Celts created the “festival of light” to welcome the eclipse, which they predicted.

It would appear that the ancient Irish constructed the complex structures at the site with such accuracy that they continue to perform their astronomical functions today.